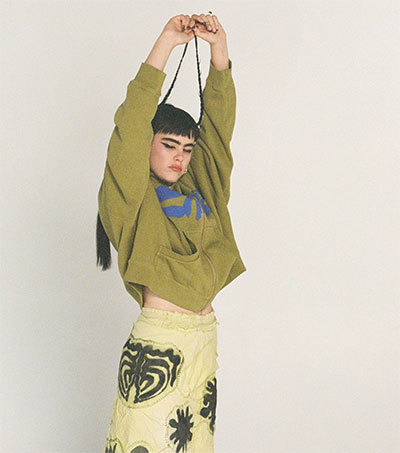 Fresh off a world tour, in an interview with Dazed magazine, New Zealand singer Benee, 22, opens up about her viral rise to fame on TikTok, writing about Gen Z anxieties via her 2022 EP Lychee, and the importance of supporting smaller artists.

Off TikTok and IRL, the musician went from anonymous artist to Gen Z pop idol. Weeks after “Supalonely” went viral, Elton John invited her on his “Rocket Hour” radio show – spotlighting her music while they discussed New Zealand’s music scene. “I think [‘Supalonely’ is] going to be a huge hit throughout the world,” he prophesied on the show, encouraging her to keep writing her own music.

This past March, she released Lychee – an introspective record bending between alt-pop, house, trap, and drum and bass while encapsulating all the very relatable emotions she felt across the past year. “[It’s] eclectic, colourful, experimental,” she says of the project.

When she’s not touring, writing, or posting ASMR clips on TikTok, Benee’s pouring her energy into discovering and promoting new artists with her female-run record label – Olive – which she founded in 2020.