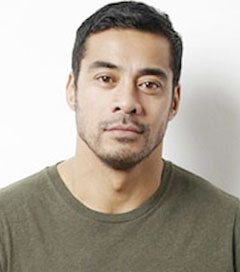 New Zealand, “more like Babeland”, according to blogger Laura Vincent who writes about who she fancies for Vice magazine’s regular column, “Crush Cakes”. “Though my crushing is as vast as the majestic Lake Taupo, I have here narrowed it down to three people,” Vincent declares. On the list, actor Robbie Magasiva: “Ever since The Strip (a fairly great early 2000s television show about a woman who opens a strip club for women) I’ve had a thing for this buff guy. His smile could melt an expensive scented candle and if there were Butt Awards (if I have my way there will be), he would be going home with the blue ribbon. Objectification aside, he is a funny guy who seems nice enough and has been fantastic in everything I’ve seen him in. But for now, let’s get back to thinking about the Butt Awards.” “With cheekbones like that”, “Smooth Singer” Willy Moon makes the three. “The way he wears a suit in such a belaboured yet artful manner, it almost don’t matter that I love his music. Moon is this ingénue musician who is suddenly all over the place, possibly the result of touring with Jack White and scoring a song on an Apple advert. The upshot of all that is that there is now a lot of swanky photos of him doing things like adjusting his cufflinks, dancing angularly, or sneering insouciantly at the camera. In short: swoon to the swoon.” Lastly, actress and “TV nudist”, Anna Paquin. I know True Blood is utterly bananas, but she’s a complete babe in it. You can’t ignore all that running around in tiny shorts and having a southern accent. Also I only just found out the character she played in Almost Famous was called Polexia Aphrodisia, although that was out of her control it still makes me like her more.”