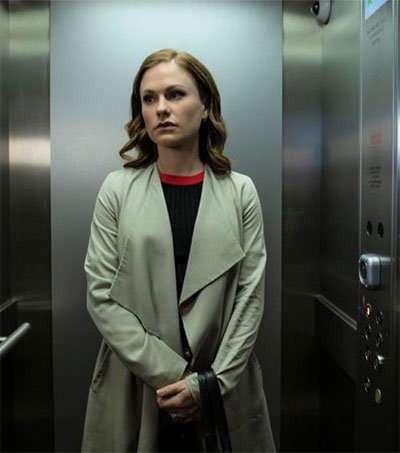 “In Flack, [New Zealand-raised] Anna Paquin plays Robyn, an American living in London and working in a high-powered PR firm, an outfit just as moral as it needs to be to protect its own brand,” Los Angeles Times television critic Robert Lloyd writes in a review of the “limited” series.

“Practically speaking, she’s a fixer for the imprudent, idiotic or unlucky famous and powerful – but not so powerful that they don’t need her help – which makes Flack a little like a gender-swapped Ray Donovan, and sometimes more than a little.

“Created and written by Oliver Lansley (Whites), its six episodes will attract or repel you depending on your tolerance for the antics of the horrible privileged class – or perhaps the privileged horrible class – and watching characters you want to like let you, themselves and one another down. It can annoy you one moment and move you another.

“Paquin is good. Like her lookalike Claire Danes, there is something in her features and bearing that suggests strength always on the verge of collapse. Her scenes with the excellent [Genevieve] Angelson are worth watching even out of context. As a universe may be extrapolated from a grain of sand, the actresses pack whole lives into an instant, even when they seem to be doing nothing much. Watching them cross a bridge together, to drop a memorial sunflower into the Thames, is as exciting, in its way, as any of the more obviously sensational moments the series has to offer.”