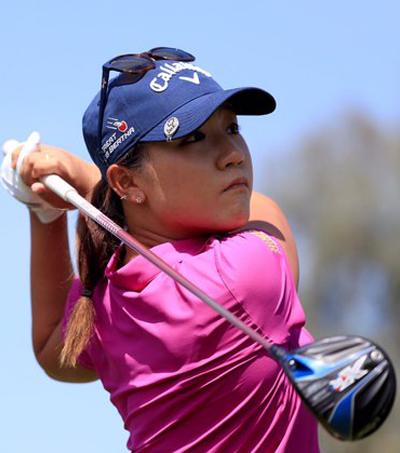 “Lydia Ko saved her best for last when she birdied the 72nd hole in Sunday’s ANA Inspiration finale to become the youngest golfer in the modern era to win back-to-back major championships”, writes Emily Kay for SB Nation.

It was Ko’s second LPGA Tour triumph in a row, her 12th tour victory, and her second straight major win since she prevailed at last year’s Evian Championship.

“Ko, at 18 and 11 months, sank the birdie putt on 18 for a final-round 3-under 69 and a one-shot win over Charley Hull and In Gee Chun, but it was her steadiness over a bunch of par putts down the stretch that kept Ariya Jutanugarn from running away with the victory.”

“There were some putts where I said, ‘Hey, if you hole this you’ve still got a chance,’” said Ko.

“Making that [par] putt on 11 and 13 was crucial …  but on 17 I knew what I needed to do. Something like a miracle needed to happen, so I think 17 was probably the most crucial putt.”

“The “miracle” was Jutanugarn bogeying 16 and 17 to lose her late two-shot advantage and fall back into a share of the lead with Ko.”

After her win, Lydia Ko carried on the Poppie’s Pond tradition and leaped into the water together with caddie Jason Hamilton, sister Sura Ko and mother Tina Hyon.

“I’m proud that I was able to make those clutch putts, especially on the back nine, but it’s a pretty amazing feeling just to see Poppies Pond,” said Ko.