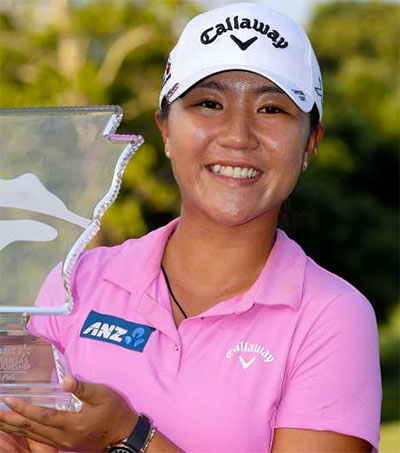 Lydia Ko Cruises to 3rd Title of Season in Arkansas

Sparked by a stretch of four birdies in her first five holes at the NW Arkansas Championship, New Zealand world champion golfer Lydia Ko, 19, opened an early four-shot lead and was rarely challenged while closing with a 3-under 68 for her third LPGA Tour victory of the year.

Ko finished a tournament-record 17-under overall for a three-stroke win. The victory was her 13th on the LPGA Tour. She first won an event as a 15-year-old amateur in 2012.

Ko has set any number of records since taking the LPGA Tour by storm, everything from being the first amateur to win two events to becoming the youngest two-time major winner after her victory at the ANA Inspiration this year.

By those standards, the Arkansas victory – Ko’s 13th in 79 career events and the third time in three years she’s won at least three times – seemed almost commonplace for the teenager who has spent the last 35 weeks atop the world ranking.

Her game, however, once again proved anything but common as she left a talent-laden field in her wake.

“It’s gone by so much faster that I could have ever dreamt of or ever imagined,” Ko said. “… I feel very lucky with what has happened. I’m going to enjoy it.”