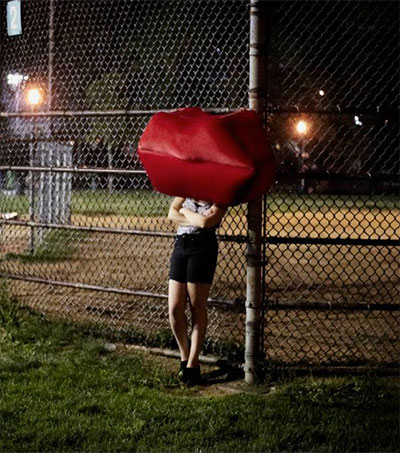 New Zealander Steph Brown and West Virginia-born multi-instrumentalist and producer Fen Ikner are Lips, an electronic pop act characterised by a girl with giant lips for a head. The duo has just relocated from New York to Tucson, looking to step out of the hustle and enjoy making music again.

Both Brown and Ikner have always made a living from making music, but the rise of online streaming sites has whittled their income down to near-nil as people opt to stream Lips tracks for free rather than purchase them. The Huffington Post interviewed the pair about what this means for them and other independent artists, and quality music, looking forward.

“The video we just made for our new single Traces of Teddy is something we never could have pulled off in NYC with our budget, so already it’s been a better place for us,” Brown explains.

“Traces of Teddy is a story about having a crush on a boy named Teddy who is interested in someone else. An evil space queen on Planet Lips sets her sights and affections on this man Teddy, so she sends her Lips-headed race of people to invade Earth and retrieve Teddy, which they do.”

The Huffington Post asks the pair about their thoughts on the pros and cons of the changing music sales – “or lack of sales” – model.

“This year on average we have had about 20,000 streams a month, and we make US $100 from that. Twenty thousand streams is not heaps, but if one in ten people liked the song and bought it, that would be a much more liveable income,” she says. “Streaming is great for the consumer but I stand by the belief that music should not be free. It just shouldn’t. Why would I spend a year making something, spend thousands of dollars on it, then give it away for free? I’m not going to.

“Making music brings me the utmost joy in life, and it’s hideous to have it tainted. Leaving the economics of being able to even afford to make music out of it though, the biggest advice I would give musicians starting out is to not forget to learn from the music of those who have gone before you, in all genres.”