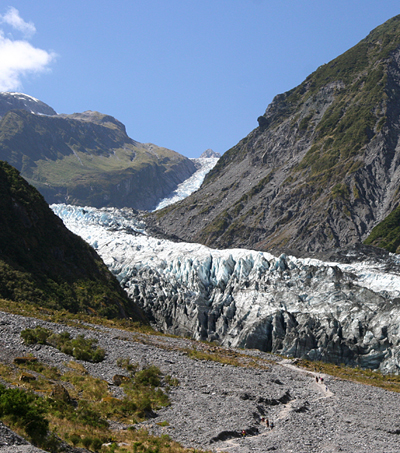 Hiking on Ice at Fox Glacier

“If the idea of sitting on a helicopter and walking on ice doesn’t keep you on the edge of your seat, what will,” writes Isabel Leong, who went heli hiking on Fox Glacier on New Zealand’s South Island. Leong describes her experience in an article in the Huffington Post.

After a 4-minute helicopter ride up to the glacier, Leong and her group were fitted on crampons, which made walking on ice a lot easier. “Armed with an ice axe in hand, their guide led them on a journey of ice discovery.”

“The glacier reaches up to a height of 2800 metres”, but they only walked where it was 700 metres high, and the ground ice goes as deep as 30 metres.

Their hike took 2-3 hours and they went “through, over, under, on and between the different ice formations” at the glacier.

“We watched the only living organism survive in these extreme conditions. We drank from little pools of ice water. We watched ice melt and flow down the névé. We climbed up and down the deep pockets of ice structures,” writes Leong.

“If we were still enough, we could hear the echoes of mini avalanches as huge blocks of ice tip over deep hollow spaces.”

Fox Glacier is the largest and most fluid of the West Coast glaciers.