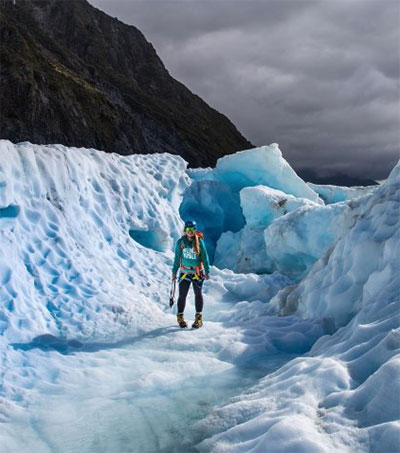 When American travel blogger Liz Carlson, the self-proclaimed ‘Young Adventuress’, moved to New Zealand six years ago from Washington D.C., she says she wasn’t sure what she’d gotten herself into. “I was struck by the enormous wall of tourism brochures as I checked into my hotel, a seemingly endless array of sports and Lord of the Rings-themed attractions,” she writes for Outside magazine.

“If one country dominates adventure tourism, it’s New Zealand, the tiny Pacific wilderness at the bottom of the world,” Carlson writes. “A sparsely populated destination full of volcanoes, glaciers, rainforests, alpine deserts, and rare birds that can’t fly, the country’s got it all. What do you expect from the place that invented bungee jumping and calls itself the birthplace Sir Edmund Hillary?

“It didn’t take long for me to learn that the national pastime is ‘doing bombs’ – jumping off things.”

They include: tramping, blackwater raft in Waitomo’s caves, a visit to New Zealand’s subantarctic islands and a heli-hike up Fox Glacier.

“There are only two places in the world where glaciers drop down all the way to temperate rainforests instead of thriving only on remote mountain peaks, and New Zealand is one of them. Fox Glacier is 12.8km long, a veritable river of blue ice winding its way down from the back of Aoraki, New Zealand’s highest peak, toward the Tasman Sea. Stunning to behold, normally glaciers like this are only accessible to elite and experienced climbers, but on Fox Glacier, there’s a booming business in heli-hikes: you quickly fly up to the glacier, where you’re then guided through ice caves, down crevasses, and more.”