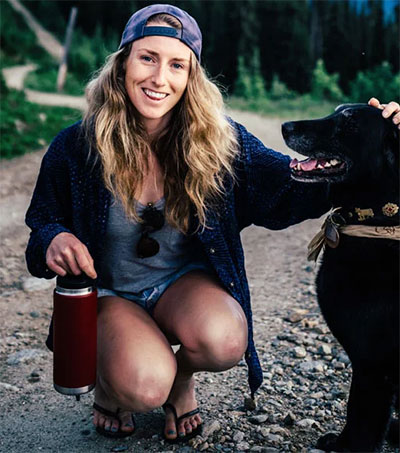 New Zealand-born Casey Brown, who has lived in Canada for the past 16 years, has established herself as one of the most talented female mountain bikers in the world. And now she’s aiming to make history. American outdoors magazine, Outside reports.

Brown, 28, is one of the fastest downhill and enduro mountain bike racers in the world. She has notched top finishes in downhill and, more recently, its sister discipline enduro, which involves descending more remote backcountry trails. But because ripping down mountains at 80km/h isn’t quite crazy enough for Brown, she is eyeing even bigger challenges. That’s why she’s in Utah, sizing up the Red Bull Rampage course for the invite-only competition, the apex event in big-mountain freeride.

The Red Bull Rampage, the most challenging and difficult mountain biking event in the world. No woman had ever ridden that line – and there are dozens more like it, including many that are harder, steeper, and more dangerous. And if Brown has her way, she’ll be the first woman to ride those, too. Her goal is as simple as it is daunting: to become the first woman to compete in Rampage.

“It’s so important to have goals that might scare you,” Brown says. Freeride is about “overcoming these insane fears”.

Brown grew up in Barn Bay on the West Coast.