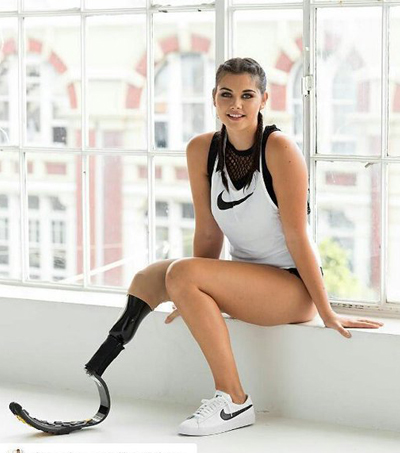 Stunning Kiwi Model Sets Out To Inspire Others

Jessica Quinn, who lost part of her leg, “is determined to challenge the modeling industry as to what is perceived as beautiful,” writes Leigh Campbell for The Huffington Post Australia.

As a child, the New Zealander fractured her femur when playing in her backyard. Her doctors tried to heal the femur for six months – without success. Following a series of tests, she was diagnosed with bone cancer.

“The doctors tried to heal my femur for six months and I had pretty massive surgery to have rods put up my femur in an effort to try to heal the break. I went through a whole lot of rehab but things weren’t really getting better,” she said.

Chemotherapy followed, before a unique surgery was decided on. The doctors feared that the rods previously put up her femur could have pushed the cancer into her hips. Chances of the cancer to return were high.

“Mum and dad didn’t want to risk going through cancer again so I had an operation called a rotationplasty. The operation was just before my 10th birthday,” said Quinn.

“Surgeons worked for 14 hours to remove Quinn’s leg from her hip to her knee, then amazingly, rotated her leg from the knee down and attached it to the hip,” as described in the article.

“I find so much comfort in helping other people and I think there’s a real need at the moment. So many people are getting caught up in social media….They are so caught up in this need for perfection that doesn’t actually exist. I want to challenge the way we use social media to prove that there are real stories to be told. I also want to challenge brands and their advertising to really broaden what aspirational models can look like,” said Quinn.