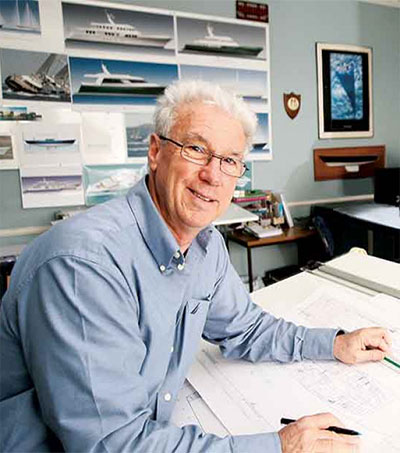 Every winter, the world’s best superyacht designers and builders gather with some of the world’s most passionate yacht owners to ski, party, share ideas and inspiration, and most of all, to recognise the most outstanding superyacht designs at the Boat International Design & Innovation Awards. A New Zealander was at Cortina d’Ampezzo in Italy to receive a very special prize.

In a 2018 St Pete Catalyst story about the former Aucklander, and his recently-published autobiography, Bill DeYoung writes:

“Holland-designed yachts have won races, set records and sliced through every ocean on the planet for more than four decades.

“‘People encouraged me quite a few years ago to do a book,’ said the yachtsman, who resides in Vancouver, British Columbia. ‘And I realised hey, it’s only half the story. But now was the right time, although there’s still some projects with old clients that would like me to be involved.’

“The book, [called All the Oceans: Designing by the Seat of My Pants] Holland suggests, was a full-time job, too. ‘So I guess you could say that I’m retired from yacht design, but there’s still a lot to do.’”