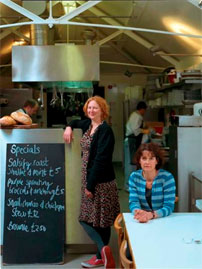 Life of the Party

New Zealand caterer Margot Henderson (standing) is profiled in the Spring/Summer issue of The Gentlewoman, a new British biannual style magazine. The restaurant founded by Henderson is called the Rochelle Canteen. It’s set in the grounds of a former school in East London. She’s married to celebrity chef Fergus Henderson, who shares her love of a great party. Henderson began catering for parties six years ago. “We started doing openings for Jane Hamlyn and Sadie Coles,” she says. “We’ve done a few fashion parties. We did a great one for Lanvin, a small dinner in Sir John Soane’s Museum. That actress Goldie Hawn was there, and she wanted to eat more and more bone marrow.”