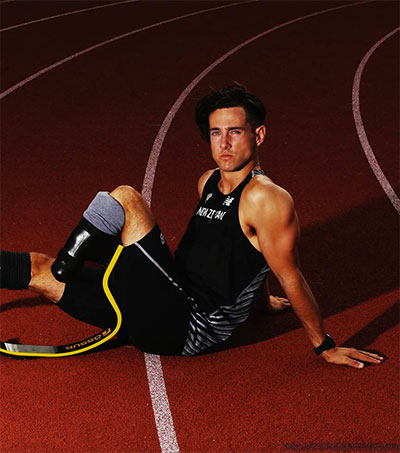 Double-amputee and Paralympic gold medalist, Nelson-born Liam Malone, 25, talks to Britain’s GQ magazine about anxiety, depression and how a life-changing car accident helped him get to Rio.

When Malone’s mother died of cancer, it started a series of events culminating in a drink-driving road traffic accident that changed his life. Three years later, Malone, who was born with fibular hemimelia, won double gold at the 2016 Rio Paralympics. Having achieved sport’s highest accolade, he is now turning his hand to training for the Iron Man and performing stand-up at the Edinburgh Fringe next year – all while continuing his day job in AI.

“At 19 I was in my first year at university. My mother had just died the year before and I was suffering from severe anxiety and depression. I wasn’t really accepting myself because I had two artificial legs. I was in an extreme environment of drinking all the time. One night I drunk drove and crashed my truck off a bank. I never thought I’d be that person,” Malone says.

“The next day the realisation of what had happened hit me. I decided to make serious changes and take control of my life. I decided I was going to go to the Paralympics and win.

“I don’t like running. I wasn’t doing it because I loved running. It was a personal challenge. It was the process of working towards something that was really rewarding. I’m currently training for the Iron Man, even though I hate swimming. I’m also performing at the Edinburgh Fringe next August. I’m doing gigs in pubs and performing in front of six people and crying myself to sleep. I might end up broke and homeless, but it’s something to work towards.

“You need to have a goal to work towards. It’s straightforward and common sense, just not common practice. My advice would be remember everyone’s battle is different. Get up and do it. No one else knows what they’re doing either.”