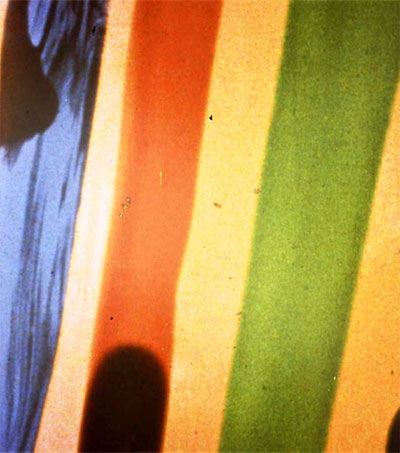 Christchurch-born artist Len Lye’s “revolutionary” 1935 film A Colour Box is an example of visually-depicted jazz and is discussed in a book by British scholar Nicolas Pillai called, Jazz as Visual Language: Film, Television and the Dissonant Image.

“[Pillai] looks carefully at Lye’s three-minute A Colour Box, one of the most important animated films in the history of the medium, which was set to music by Don Baretto and His Cuban Orchestra and inspired by jazz as a concept,” American musician and critic Will Layman writes in a review for PopMatters.

“The essential premise of Pillai’s argument is that jazz is more than music alone. He asserts that it is ‘an adaptive process, in constant dialogue with the culture that encompasses it’,” Layman writes.

“[Lye] sketched and drew directly onto the film to create his animation. The music and the formal elements of the filmmaking were both boldly freeing at the time. Pillai argues that the politics of jazz – particularly the racial politics – were critical for Lye, who moved to London in 1925 and made this film for the British General Post Office film unit. Structurally, Pillai writes, ‘the visual elements of the film engage in dialogue with its soundtrack’. This interactivity and bold innovation, then, are reflections of jazz’s meaning for the culture.”

Much of Lye’s work is now housed at the Govett-Brewster Art Gallery in New Plymouth.

Lye, a naturalised citizen of the United States, died in New York in 1980 at the age of 78.

Jazz as Visual Language: Film, Television and the Dissonant Image was published in November 2016.