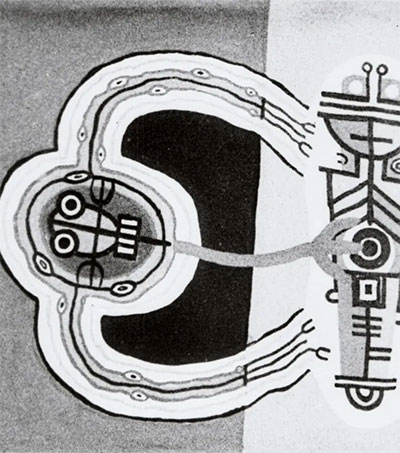 An exhibition on Surrealism, co-curated by Tate Modern and the Metropolitan Museum of Art, explores the movement’s previously unacknowledged multi-culturalism. Artworks from six continents, including Oceania, explain how, says the BBC’s Matt Wilson. Surrealism Beyond Borders is on at the Tate until 29 August 2022.

“One of the exhibition’s most extraordinary artworks is Tusalava (1929), a 10-minute animated film by New Zealand-born Len Lye,” Wilson writes.

“In it, primordial, worm-like forms wriggle out of a void, give birth to a humanoid figure, and then vanquish him. Lye was inspired by tales of the witchetty grub which came from the Arrernte people of Central Australia, and used imagery inspired by Māori and Samoan art. But these cross-cultural interests were combined with a technique beloved of the Surrealists. ‘It is painted directly on to the film, so it is a sort of doodling automatism made directly on to the celluloid,’ curator of Surrealism Beyond Borders Matthew Gale explains. Automatism is a characteristic Surrealist process that involves ‘free’ writing or drawing, in an attempt to decouple expression from conscious control. The film – the result of two years’ worth of painstaking work – brings the spectacle of automatism breathtakingly to life.”