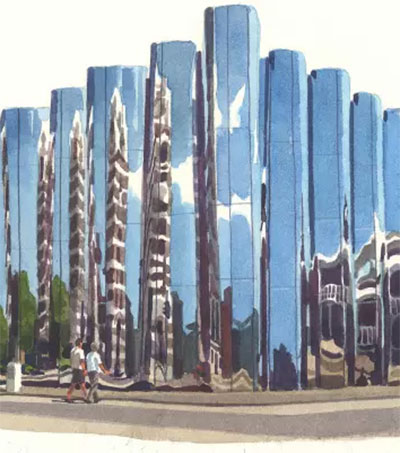 “[Len] Lye’s story might well have slipped into obscurity had his 18,000-item archive not ended up in a small seaside city on the west coast of New Zealand’s North Island,” Nigel Tisdall writes for the Financial Times. “Blessed with fine surfing beaches and the 2518m peak of Mount Taranaki, a snow-streaked volcano so perfectly shaped it has served as a movie stand-in for Mount Fuji, New Plymouth was always a pleasant place to stop by – but rarely one that time-pressed international travellers would go out of their way for.

“That is changing. Improved flight connections from Auckland and a handy position at the far end of the Forgotten World Highway, a 155km scenic drive that winds through topsy-turvy hills inland, are all proving incentives to take a trip west. More crucially, the opening of the landmark, free-entry Len Lye Centre in 2015 – the first museum in New Zealand devoted to a single artist – has put New Plymouth firmly on the cultural map.

“Set in a once rundown area, its rippling mirrored façade is something you’d expect in Copenhagen or Miami, not a provincial city of 74,000 people. Inside, the galleries make it abundantly clear why Lye’s ‘goop’ is worth discovering, with mesmerising examples of his kinetic works, along with film screenings and changing exhibitions – currently On an Island, about his time on Mallorca with Graves and Laura Riding (until 6 August).

“As the then mayor, Andrew Judd, noted at the opening, ‘You just need to look at the Guggenheim in Bilbao and the Museum of Old and New Art in Tasmania to see the powerful economic effect art combined with destination architecture can have’.

“In a nation where tourism often seems fixated on sport, outdoor adventures and The Lord of the Rings films, it is refreshing to find a city embracing modern art with such gusto. As for Len Lye, he must be oscillating in his grave with joy.”