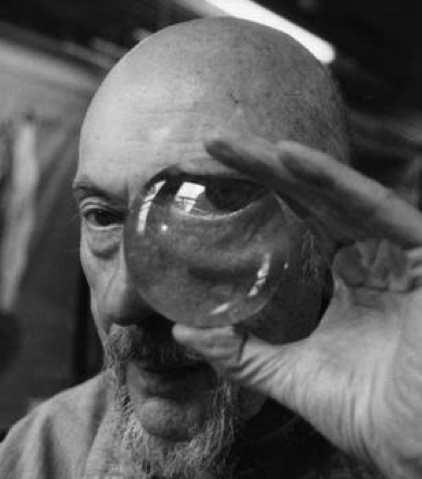 The most comprehensive exhibition of Len Lye’s art to be seen in Europe has opened at the Museum Tinguely, Basel, Switzerland.  Featuring his kinetic sculptures, paintings, photograms, drawings, models and films, the exhibition occupies four large galleries, and examines in detail the full oeuvre of New Zealand’s most acclaimed international artist.

A creative visionary, Len Lye (1901–1980) was a seminal modernist filmmaker, poet, painter and kinetic sculptor ahead of his time. Most of his works were so revolutionary that technology literally had to catch up to him – meaning much of Lye’s work was not realised in his own lifetime.

The exhibition is a partnership between Museum Tinguely and the Len Lye Foundation with support from Govett-Brewster Art Gallery, New Plymouth District Council and Nga Taonga: Sound and Vision. The exhibition Motion Composer opened on 22 October to an audience of 600 people and a series of speeches including by New Zealand’s ambassador to Germany, Rupert Holborow. It continues at Museum Tinguely until 26 January 2020.

Motion Composer features a notable display of Len Lye’s tangible motion sculpture including the debut of Sky Snake, commissioned by Museum Tinguely for the exhibition. Comprising a bead chain suspended from the ceiling that twists and turns in a sinuous dance, Sky Snake had its first and only public display at the Albright Knox Gallery in Buffalo, New York in 1965. Further sculpture includes important works loaned from the Art Institute of Chicago, Albright-Knox Art Museum and the Whitney Museum of American Art – all exhibited in Europe for the first time.

Director of the Len Lye Foundation, Evan Webb says: “Exhibiting Len Lye at the home of Jean Tinguely has special significance because it brings together the Len Lye Centre and the Museum Tinguely – the only two single artist museums in the world dedicated to kinetic art.

Jean Tinguely was born in Switzerland in 1925 and built many of his distinctive works in Basel. He died in 1991 and Museum Tinguely was built in 1996 to store, conserve and exhibit his extensive collection of kinetic sculptures and drawings.

“Len Lye and Jean Tinguely knew one another and this exhibition, once again, brings together their worlds.  The spaces resound with the sounds of Lye’s sculptures and films, and Tinguely’s theatrical machines as if the two artists are in conversation,” says Mr Webb.

The exhibition was accompanied by a two-day seminar organised by Museum Tinguely and the University of Basel.  Invited speakers from Europe, the US, Canada and New Zealand engaged with students from the Media Studies department with talks ranging from the conservation of film to an exploration of Lye’s ambitious plans for his huge outdoor works.

Shortly before his death Lye and his supporters established the Len Lye Foundation, to which he gifted his entire collection. His collection was gifted on the condition that a suitable and permanent home be created in which his works could be fully realised. In 2015 the Govett-Brewster Art Gallery re-launched as a greatly expanded museum including the Len Lye Centre. With its curved exterior walls of mirror-like stainless steel, the Govett-Brewster Art Gallery/Len Lye Centre is Aotearoa New Zealand’s first example of destination architecture linked to contemporary art and its first institution dedicated to a single artist.

In 1964 Len Lye said “Great architecture goes fifty-fifty with great art”. The new building is an example of innovative thinking in both engineering and architecture. The architects are Patterson Associates, one of New Zealand’s most internationally recognised architectural firms. Specialising in contemporary art from the Pacific, the Gallery features exhibitions of Lye’s work in kinetic sculpture, film, painting, drawing, photography, batik and writing, as well as related work by contemporary and historical artists.

Len Lye was born in Christchurch, and in 1926 at the age of 25 lived and worked in London, becoming part of the Seven and Five Society, an artists’ group centred on Ben Nicholson, Henry Moore, Barbara Hepworth and Frances Hodgkins. Lye exhibited with the British Surrealists, taking part in the International Surrealist Exhibition in London of 1936.  He also worked as a film-maker for the British Post Office and other governmental commercial organisations and made commercial films of great artistic merit. Just as he believed there to be no barriers between cultures, between “Western” and “primitive” art, so, to his mind, there was no distinction to be drawn between “high-brow” and “low-brow” culture.

Lye lived in New York City from 1944. In the late 1950s, finding it increasingly difficult to market his films commercially, he turned to kinetic sculpture and created a series of sculptures that he would continue working on right up to his death in 1980, playing through ever new variations in size, material and use. They were intended as much for museums as for amusement parks, cultural barriers being non-existent for Lye.