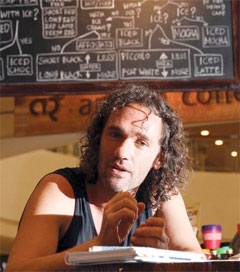 New Zealander Michael Wilson used to be in the British Army and even started a construction company in Scotland before finding his true calling: coffee, with the Artisan Roast brand.

Wilson also co-owns two cafés in Scotland. His first Artisan Roast café at Broughton Street in Edinburgh, was named the best café in the UK by Qype last year, while his three Malaysian outlets won Time Out KL’s Best Place for Coffee in 2012.

Wilson is considered a coffee sage by local Kuala Lumpur espresso enthusiasts and has trained many baristas, some of whom have gone on to open their own cafés.

The Malay Mail Online asks Wilson why it is so important for him to visit coffee farms and interact directly with the farmers who grow the beans he buys.

“Because they’re people. This business is about people and I like to like the people I work with,” Wilson says.

“It means so much more to me to meet the people we buy from, to see their passion for their product and so they can see that we share that passion. I’m also a committed greenie and want to see that they’re committed to protecting the environment. If I don’t like the farmer, we don’t buy from them.”