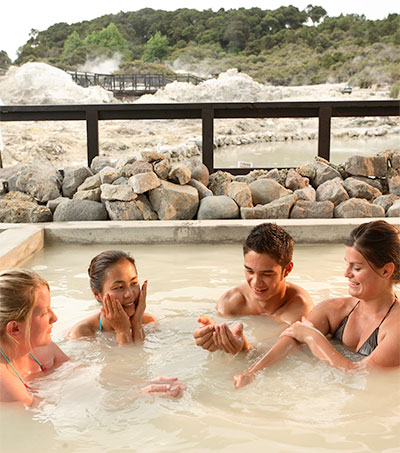 “Just follow your nose and it will get you faster than any GPS can to Hell’s Gate, the most active geothermal park in Rotorua, which earned its memorable moniker from George Bernard Shaw when he visited in the early 1900s,” the Malay Mail’s Vivian Chong describes after a recent visit.

“The Irish playwright was reportedly so enamoured by what he saw that he cast his atheism aside and labelled it as a portal to the netherworld.

“From miles away, you can detect the unmistakable smell of sulphur but interestingly, as one draws near, the assault on the olfactory is barely discernible. Perhaps its role is just to draw you to this ancestral home of the Ngati Rangiteaorere tribe, who have lived here for seven centuries and consider it sacred.

“Following in their ancestors’ footsteps, the [Rangiteaorere] folks embraced this as a healing and rejuvenation spot, and the tradition is upheld at Hell’s Spa.

“You sit in pools of steamy sulphurous water and slather your face and body in mud in the name of good health and silky, radiant skin. It’s one of many ways that the land provides for the people, who have let its volcanic features guide their culture and way of life.”