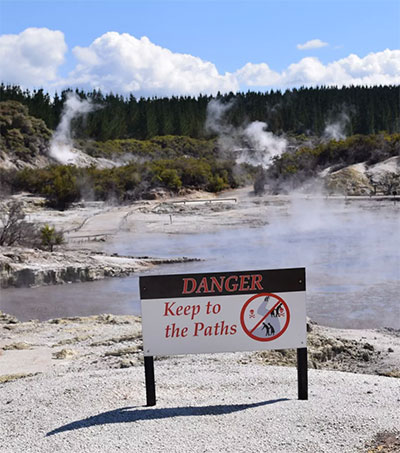 “The Rotorua region, one of the world’s most geothermally active areas, is the Southern Hemisphere’s take on Yellowstone – minus bison, bears and backed-up crowds,” journalist M.L. Lyke writes for The Washington Post.

“Gases and steam hiss out of everywhere: In pastures, in backyards, in the middle of the city’s huffing lakeside park, where visitors find free thermal foot baths and cautionary danger signs,” Lyke writes. “Modern-day eruptions there have thrown football-size chunks of mud and rock many stories high.

“That volatility is, to borrow a Kiwi phrase, ‘a bit of a worry.’ But locals who live on this thin crust of quake-prone, jerked-about earth with molten rock stirring beneath them remain unflappable. They’re used to a landscape constantly being made and remade by eruptive geological forces. ‘It’s a new country,’ one genial fellow reassured me with a shrug. ‘Things are going to happen.’