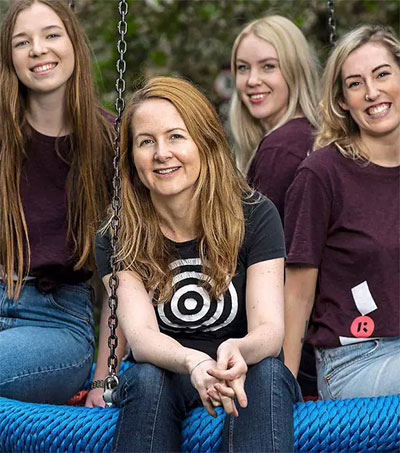 London nannying service Koru Kids has been created by New Zealander Rachel Carrell with the aim of tackling the UK’s “fragmented and backward” childcare market which results in complex arrangements cobbled together by frazzled parents.

“Everyone’s childcare is one sickness phone call away from disaster,” Carrell says.

As well as providing nanny recruitment, training and checks, the tech platform offers support. Koru matches up local families with a nanny who can work just a few hours each day. It charges parents £12 an hour.

The antipodean is a graduate of consulting behemoth McKinsey, with her six years taking her across the globe and into every industry.

One assignment even took her to a remote Russian oilfield for months. Her first chief executive role followed, growing turnover from £6 million to £20 million at online doctor service Dr Thom over three years from 2012.

She spent a swift year running IVF chain ARGC but had a yearning to build something from scratch herself.

At Koru, there’s been steady growth since the decision to focus on afterschool.

According to Forbes, Carrell has just raised £3.5 million ($4.7 million) in a round led by VCs Forward Partners and Albion Capital to bring these new-age nannies to parents around the world.

Forbes writes that the key sell for students is Koru Kids lets them work flexible hours around their education while earning up to £11 per hour depending on family requirements: significantly more than the minimum wage they could expect in a local cafe or pub. Today 18-20-year-olds receive a minimum of £5.90, and 21-24-year-olds a minimum of £7.38.

Carrell, who was once elected as a Young Global Leader by the World Economic Forum, has big plans to the flesh out Koru Kids’ digital offering.

She plans to use her recent fundraise to improve Koru Kids’ online communities (where they can swap tips on everything from behaviour management to recipes and activities), to smarten up Koru Kids’ matchmaking processes, and to develop digital methods that continue to train nannies throughout their employment, she tells Forbes.

In the years ahead, the founder is also keen to expand into last-minute childcare cover, and younger age ranges, before taking on cities in Britain and beyond. “I’m constantly getting messages from people asking for us to open in their city, in the UK, but also Ireland, Belgium and American cities like New York,” Carrell says.