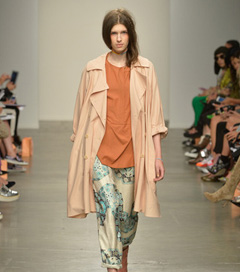 Karen Walker took to the runway at the Spring 2014 New York Fashion Week, with a collection Style.com described as ‘easygoing’.  According to The Department of News, the collection, titled Utopia, looked to the contrasting nature of Krishna-style, “the mix of traditional Eastern utility with modern urban practicality”.

Another New Zealand-native, Rebecca Taylor, took to the runway earlier in the week.  Inspired by Pierre-Auguste Renoir when he said, “There are enough ugly things in life for us not to add to them”, Taylor aimed to create a collection that was “modern, fresh, and beautiful”.

According to Style.com Taylor achieved this, while not forfeiting her signature ultra-feminine style, in collection described as “youthful, light, and [embracing] the ‘fresh beauty’ she aimed to create”.