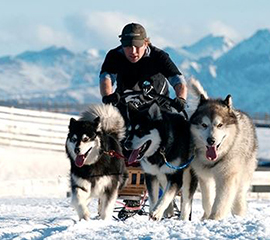 A New Zealander was the first musher en route to the town of Nome when the infamous Iditarod Trail Sled Dog Race began Sunday.

Otago based Curt Perano and 68 other mushers began the world’s most famous sled-dog race by crossing frozen Willow Lake about 80 kilometers north of Anchorage.

It was a staggered start, meaning one musher left every two minutes. The order was drawn at a musher’s banquet Thursday night in Anchorage.

Curt, 41, was born in New Zealand and raised in Singapore, Europe, the United States and New Zealand. He and his wife Fleur’s love of sled dogs started in the late 1990’s when they acquired their first Northern breed dog, an Alaskan Malamute.

Soon the pair had five dogs which they began to run recreationally in New Zealand, entering events around the country. After spending time in North America, the pair have now  brought the Northern tradition the Southern Alps, opening a sled dog tour business Underdog New Zealand only 55 minutes from New Zealand’s adventure capital Queenstown.