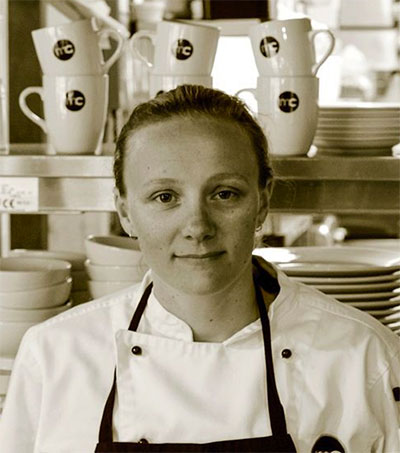 Kirsten Gilmour, 38, owner of a multi-award winning restaurant in Aviemore, Scotland, is also the proud author of new cookbook, The Mountain Cafe Cookbook: A Kiwi in the Cairngorms.

Gilmour is a great success story but she also gives us an insight into how fresh and intuitive our top New Zealand café culture is. What seems normal to us in our best cafés, can be seen as revolutionary and extraordinary overseas.

She was raised in South Canterbury and a key part of Gilmour’s childhood was spent on her grandparents’ small farm in Temuka. It was an introduction to food that still inspires her menus and approach.

“I remember picking fruit in the orchard, growing things, picking tomatoes, making relishes. My Nana was a Southlander so it was totally waste-not, want-not. My grandfather was Hungarian and he was very much salamis and rich food. They were quite opposite,” Gilmour says.

At 17 she took polytechnic courses in hospitality and found her niche. She was hungry for knowledge, incredibly driven and “probably a bit arrogant”. But she won gold in national competitions and at 20 got a one-way ticket to the United Kingdom to follow a cooking career.

A spell at a fine dining restaurant made her realise she was a back-to-basics person. It had 36 chefs, only one woman (her) and everyone spoke in French. She learned some skills but learned much more working for Peter Gordon’s (The Sugar Club) former sous chef Ann O’Carroll.

Gilmour was working in the outdoors shop below the Mountain Cafe when the owner quit. The young chef had often talked up how she’d do it better and suddenly she had the chance to do so.

On the back of Gilmour’s book, out in New Zealand at the end of April, iconic New Zealand trailblazer to the UK Peter Gordon writes: “Kirsten has been serving her Kiwi-inspired food for many years and here she shares her secrets for those delicious breakfasts, meals, cakes and drinks. As a fellow New Zealander, I’m proud of her achievements.”