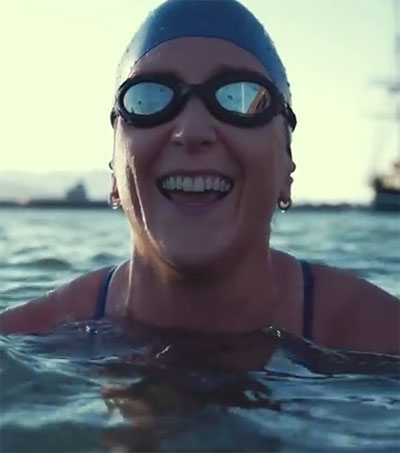 The world’s best open water swimmer, New Zealand-born Kim Chambers, 38, who recently swam from the Farallon Islands to San Francisco, tells Outside Magazine that fear makes you grow, a little fat is okay, and make sure you have a big scary goal.

Eight years ago, Chambers was fresh off an injury that shattered both her leg and her sense of self. Multiple surgeries and two years of physical therapy gave her leg back, but it was swimming that gave her a new life. And over the past few years she’s traversed some of the toughest waters in the world.

Chambers has already put together an impressive resume that includes becoming only the sixth person and third woman to finish the Oceans Seven Challenge. On par with the Seven Summits of mountaineering, the swims are chosen for treacherous water conditions and potential wildlife risks.

Outside asks why would someone want to get in the water and swim through the middle of the so called Red Triangle of shark attacks, an area off of Northern California in which 40 per cent of shark attacks in the US have occurred? Senior scientist for the Farallon Program Russell Bradley is hesitant to calculate just how risky it is to take a swim at the Farallon Islands. But Bradley is sure about one thing, “I would never, ever swim out there.”

Before Chambers’ swim, which she completed in 17 hours on 8 August 2015, scientists urged her not to get into the water, believing that the great whites had returned to the island earlier than in previous years. But despite the obstacles, Chambers made it safely back to San Francisco, becoming the first woman to swim the distance.