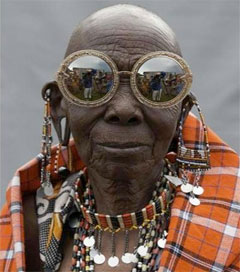 Kenyan Artisans Team Up with Walker for Visible Campaign

Designer Karen Walker has taken her sunglasses to Kenya shooting her latest campaign in association with the United Nations’ International Trade Centre Ethical Fashion Initiative, which works with artisans in “urban slums and disadvantaged rural areas” of the country.

Titled “Visible”, the collection involved craftspeople in the region creating both screen-printed and elaborate beaded pouches to accompany the sunglasses. The artists also took a turn as models, posing in frames for the official campaign. The sunglasses will be available for purchase starting 10 February in Karen Walker stores.

Walker’s Facebook page says: “The people photographed here include machinists, cutters, tailors, production managers and metal workers who have acquired or refined craft and management skills through the Ethical Fashion Initiative. For the Maasai artisans, to whom intricate beading is a tradition, connecting to the fashion world through the Initiative brings a vital source of income.”

In the above image, Rason, a Maasai beader, wears the Orbit Filigree in Gold Glitter.