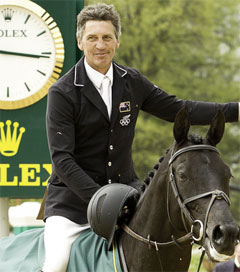 Seven-time New Zealand Olympian Andrew Nicholson, 51, has won the Rolex Kentucky Three-Day Event in the United States. Nicholson maintained his lead after the cross-country riding Quimbo, jumping a careful clear round in the showjumping which cost him three time penalties, but it was still enough to take the title. “Quimbo is a very smart horse – very clever,” Nicholson said. “He is bred to be a showjumper. At all the big competitions he feels impressive in the warm-up, and even better in the ring.” Nicholson’s victory at Kentucky also gives him a clear lead in the FEI Classics series, a points-based competition across the five four-star eventing competitions in the world. Originally from the Waikato, Nicholson is based in England where he works as a horse trainer.