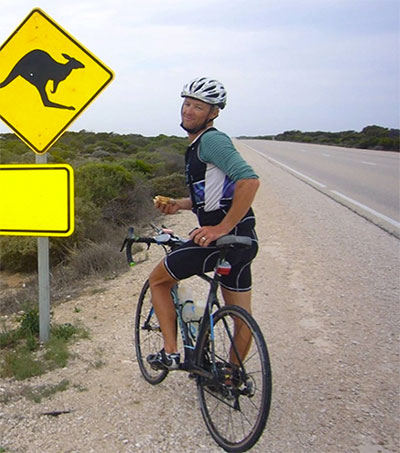 Nicholson, 45, a part-time gym instructor and primary school teacher from Dunedin, set off from Auckland on 12 August and took in America, Canada, Europe, India, south-east Asia and Australia on his journey of 29,179km.

Once confirmed by Guinness World Records he will have beaten the current holder of the title, Bate, who set the current pace in 2010.

Nicholson competed in three winter Olympics for speed skating in the 1990s, and says his coaching from Olympic sports psychologists was “pivotal” to his cycling success.

“When I click into the pedals I go into total concentration and focus mode,” he says.

During the four months on the road Nicholson went through four sets of tyres, three chains and many, many isolated road hours to think.

“I was alone on the bike all the time, I had no back-up or support team. When you get to places like Turkey you get a bit lonely, because culturally it is so different. But I am quite comfortable with my own time, so it wasn’t a major problem.”

He is the current holder of the New Zealand 24 hour cycling record.