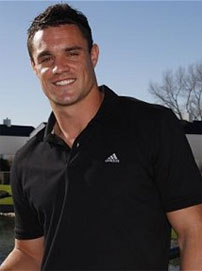 Keeping His Shirt On

All Blacks fly-half Dan Carter has announced he has signed a four-year contract to stay in New Zealand after this year’s Rugby World Cup while retaining an option to play overseas for a short period. “There were a few different reasons for signing but the underlying factor was the black jersey,” Carter says. “If I went overseas I would not be able to wear the black jersey and that was a big reason for staying. I haven’t looked at anything at all like whether I went back to Europe or to Japan or even just took a break,” the 79-Test veteran said. New Zealand Rugby Union (NZRU) chief executive Steve Tew hailed Carter’s retention as a major coup given the level of interest from overseas clubs in one of the sport’s highest-profile players. “We are absolutely delighted Dan has chosen to continue his career in New Zealand,” Tew said.