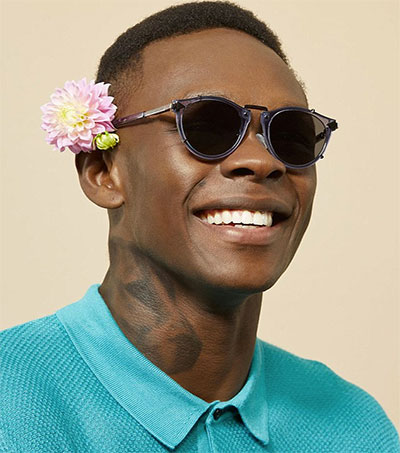 Israel Adesanya, 28, a UFC fighter, stars in a new fashion campaign for New Zealand designer Karen Walker, in which the pair tackles the concept of masculinity while promoting Walker’s new eyewear collection.

While most images of Adesanya show a tough guy with his fists up, this campaign features the muscular athlete smiling serenely with floral accessories.

Karen Walker is launching her new collection, Monumental, this month, and enlisted the UFC fighter to promote it.

The designer said she hopes to shed light on society’s perception of masculinity.

“It just felt like the right time to reassess the concept of modern masculinity. When we talk about what it is to be a man now, it’s such a fluid concept. And yet, there’s also this wonderful permanence. We wanted to capture that. To be subversive and classic at the same time,” Walker said.

“He’s an interesting man. An MMA fighter who started as a dancer is a very modern take on masculinity. His nickname, the Last Stylebender, captures his subversion and reinvention of his craft, and that’s a place where we love to work as well – reinventing classics and throwing together opposites.’

Adesanya is originally from Lagos but now resides in Auckland, where instead of dancing, he fights for UFC.