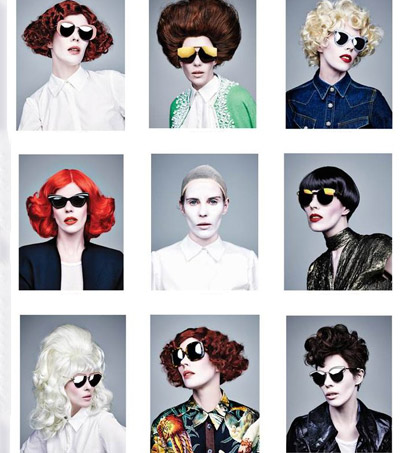 Karen Walker is stepping into the spotlight in her latest campaign for Karen Walker eyewear, reports Georgina Safe in The Australian Financial Review. For her new Transformers eyewear campaign she “takes on various personas in a riff on the multiplicity of roles women are expected to take on each day, as well as on the heightened reality of social media.”

“The idea really started from the fact that so many of our customers have to be so many characters in one day, as do I,” said the Kiwi designer.

“You have to take on so many different identities and maybe you don’t take your full self to any one of them. We wanted to really reflect that multiplicity of modern life with a heightened sense of reality.”

“Referencing the work of Cindy Sherman, Robert Mapplethorpe and Andy Warhol, Walker poses as characters including a Sassoon-bobbed ’80s disco diva, a Thierry Mugler flame-haired android, a country and western star and even Mapplethorpe himself,” as reported in the article.

“It’s a nod to the idea that you put on a different pair of shades and you feel like a different character, and it’s also a nod to social media and the way it allows you to play a range of different parts,” she said.