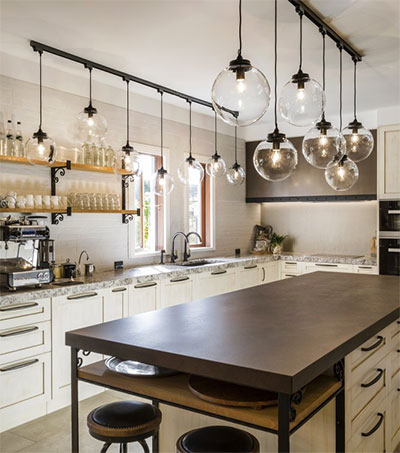 A Karaka kitchen designed by Shane George is one of just two international entries to make the finals of the SBID International Design Awards in the KBB Design category. Winners will be announced at a gala evening at the Dorchester Hotel in London on 27 October.

George says it was a “very nice surprise” to get the news. “It is exciting,” he says. “It’s got some legs this kitchen, having won the TIDA Kitchen Design of the Year award recently, and it was runner-up in the 2016 NKBA Supreme Kitchen Design award.” The kitchen was also a finalist in NZ House & Garden’s 2016 Interior of the Year award.

He says his clients regularly entertain large groups, so they needed a kitchen that had an excellent workflow – almost semi-commercial in nature. But it also needed to feel intimate and welcoming when it was just the family.

To meet this expansive brief George created a large U-shaped kitchen with a central island. “This is a very hardworking kitchen, capable of accommodating a number of cooks at one time, with efficient flow in all the work centres,” he says. “It can also cater for large groups with ease, while still being a lovely family kitchen.”

The designer says the final judging comprises a 70 per cent judges’ vote and 30 per cent “people’s choice” vote.

George, who is a designer at Auckland-based Kitchens By Design, has already clocked by many kitchen design awards. He has been NZ Kitchen Designer of Year twice.