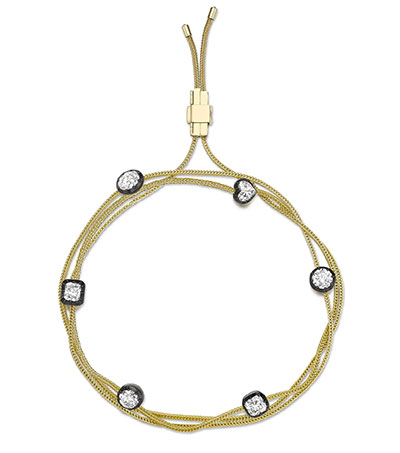 “We started out with the idea of a diamond tennis bracelet, but then I said no, we can do something better than that,” says New Zealand jewellery designer Jessica McCormack of the private commission that was the starting point of her latest collection, Cable Car.

Those who are familiar with the Mayfair-based designer’s work won’t be surprised: renowned as the cool girl’s diamond jeweller, a classic line bracelet isn’t really her style.

The resulting necklace sees 15 two-carat diamonds glide like mountain gondolas along a rope of handwoven gold, which can be worn long or short, fastened or undone, as a scarf, sautoir, lariat or choker, or wrapped the wrist as a bracelet, with the diamonds positioned at any point.

“It was a big purchase, so we wanted to make sure it was as versatile as possible,” says McCormack, for whom the commission was an opportunity to elevate her designs – not to mention her goldsmiths’ skills.

McCormack approached a German goldsmith to create the industrial-chic, 18-karat gold chain. “It’s unlike any chain I’ve used before – it’s quite Germanic in its very precise, continuous, repetitive make,” she says. “Its an antique-style, foxtail chain so it has that touch of the old which I love.”