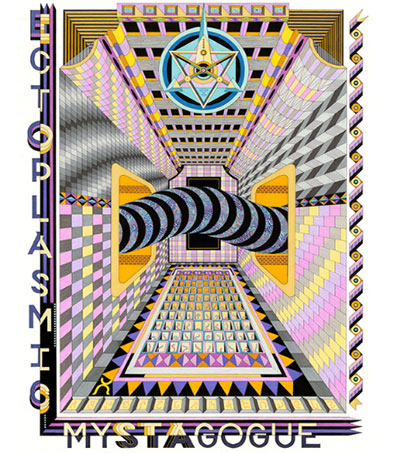 Jess Johnson, a Tauranga-born, New York-based artist, whose work includes drawing, animation, video, installation and recently, virtual reality (VR), offers some fascinating insights into how altered perceptions change how we communicate and the forms of knowledge that we value. Illya Szilak investigates for the Huffington Post.

For her VR piece, Ixian Gate, which premiered at The National Gallery of Victoria in Australia, Johnson, 37, began with drawing, not on the computer, but by hand.

When describing her process, she offers a spatial metaphor, one which hints at the potential for scale and physics to create new kinds of narrativity in VR.

“I guess constraining myself to drawing this world by hand has an element of the ridiculous to it … but within these parameters the possibilities can seem infinite instead of restricted. Inside my studio, the world can seem very, very small but very, very large at the same time.”

Not only is the world of Ixian Gate horizonless, the experience begins with the user passively transported, as if on an invisible railcar, through the brightly coloured, precisely drawn “sky” before being moved into a large architectural space.

“No one notices the absence of the text in my animations or virtual reality,” Johnson says. “But it’s so important in the building [drawing] process. I need the language to bring the world into existence, but once it’s dragged into being, it’s solid enough to exist on its own.”

Johnson presents her solo exhibition, Eclectrc Panoptic from 29 July until 8 October at the Talbot Rice Gallery in Edinburgh as part of the Arts Festival.

And, in early 2017, a major exhibition of Johnson’s work will be on show in association with the K11 Art Foundation in Hong Kong.