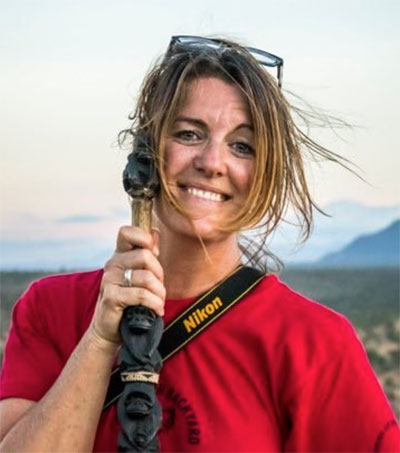 Just a year ago, 48 year-old Auckland-born Jane Wynyard was a public relations maven in London with a career and lifestyle many of us would envy, Kelly Ana Morey writes for Stuff. She completed an eight-year stint as head of PR for Hearst Magazines UK looking after key fashion publications such as Harper’s Bazaar, Elle and Esquire.

By 2015, she was working as global head of PR for luxury fashion retailer Net-a-Porter’s publishing arm which included the print magazine Porter and fashion website The Edit. Her life was long hours, shiny parties, glorious clothes and wall-to-wall celebs.

Then last year in August she quietly handed in her resignation to pursue a dream to become a wildlife photographer and conservation activist in East Africa.

Wynyard’s trajectory from Taranaki schoolgirl to wildlife conservationist and photographer in Africa started when she landed a place in a New Zealand News scheme, coupled with a cadetship at the Taranaki Daily News, at the age of 17.

“We had the most brilliant tutors – Garth Gilmour, Jim Tucker and June Litman – some of New Zealand’s finest journalists and editors,” Wynyard says.

Buying her first DSLR, a Nikon, at the camera shop at Heathrow Airport in October 2015 on a return trip to Africa would be the start of a series of events that would see Wynyard completely change her life.

“I used to wear Louboutins, Tom Ford and Joseph and now I’m in flip-flops, shorts and a tee pretty much every day. I wear a dira dress at the weekends. No makeup, I wash my hair in a bucket shower that I have to clean the monkey poo out of. Last night I was trapped in my cabin by an enormous wild elephant grazing outside my door, there are bats and hyrax in my pit toilet, I have to watch out for scorpions and snakes, leopards and lions and the river is full of crocodiles … but I couldn’t be happier.”