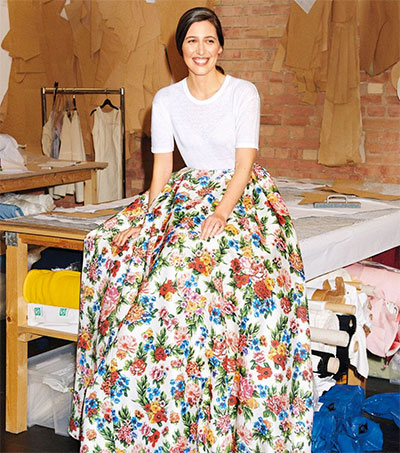 “It would be impossible to write about my childhood without mentioning the two amazing women in my life who raised me: my mother and my grandmother,” New Zealand-born designer Emilia Wickstead says in the May issue of British Vogue.

“My grandmother, Amalia Pia Emilia Vignola, whom I called Nonna, brought out the fairytale in everything. She used to tuck me into bed so vigorously that I never felt anything less than comforted and then afterwards, she would sit on a cane basket box next to my bed and read Hans Christian Andersen to me.”

“My mother, Angela Maria, was her sixth child of eight with my grandfather, a young New Zealand soldier, William Wickstead, whom Amalia met aged 22 in Florence, not long after war had broken out. Together, in the hope of a new life far away from the war they went to live in Auckland, where my mother and I were born.”

“While pregnant with me, [my mother] started sewing in the evenings for extra income, and eventually enrolled in a six-month diploma in fashion design. Soon after, she opened her own store offering ready-to-wear, made-to-measure and bespoke designs.”

“Her fashion shows always left me starry-eyed. She always had – and still does – such impeccable taste.”

“We moved around a lot, [but] she always created a wonderful home.”

“New Zealand is humble and inordinately down-to-earth, which makes it heavenly,” Wickstead says. “I was happy just being myself there. I created scrapbooks, I wrote endless diaries, and I danced and sang. I grew up reading Vogue and other fashion magazines, which we had to order directly because they were impossible to find in Auckland.”

“Whenever I buy a pair of shoes now, not only are they a new prized possession but so is the shoe bag inside the box. I love the fabric, the finishing details … They remind me how important it is to keep being impressed and excited by the little things which I had in abundance of during my childhood – and for that I will always be grateful.”