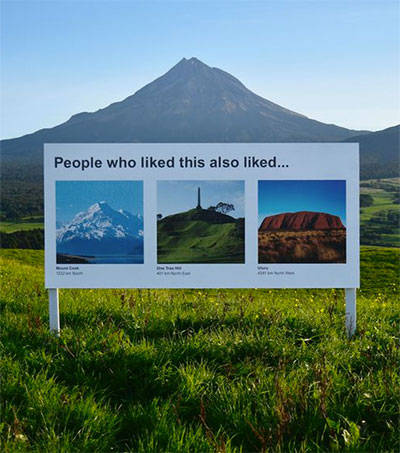 A New Zealand public art project of physical signs bearing a striking resemblance to their digital cousins, is looking to draw attention to the ubiquity of online recommendations, which double as advertisements, and influence the stuff you eat, watch and consume.

“Perhaps you’re worried that as your life moves online and Alexa moves into your living room, your decisions are essentially being made for you,” London-based artists Scott Kelly and Ben Polkinghorne ​write in an statement on their website Signs of the Times. “Perhaps you’re worried you live in a bubble. Perhaps you’ve never thought about it. Hopefully, you are now.”

The highly visible signs mimic the now ubiquitous online recommendations, with one in front of the stunning Mount Taranaki suggesting “people who liked this also liked” with a list of three other mountainous wonders: New Zealand’s Mount Cook, the extinct volcanic peak of One Tree Hill, (Maungakiekie), ​and Australia’s famed Uluru rock.

The artists tell Andrew Liptak of The Verge the project sought to make people aware of how the algorithms behind these recommendations can affect daily life.

“Who runs the world?” the creative partners ask in their statement. “Collaborative filtering recommender algorithms.”

Past projects by the duo include collecting fallen petals stamped with shoeprints, and mocking up library book stamp cards of influential pieces of literature showing the names of famous people who’ve been influenced by them.