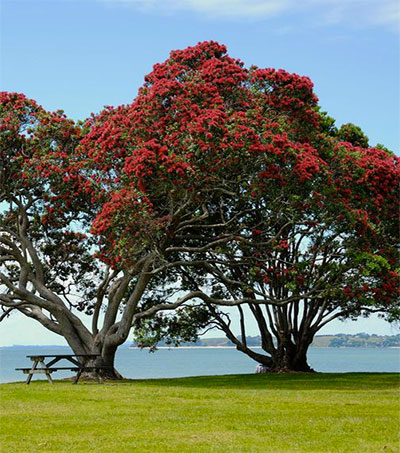 The pohutukawa, a species of myrtle that erupts with fiery crimson flowers during warm weather, is one of New Zealand’s most iconic trees. The tree also has sacred significance to the indigenous Maori culture. But a new study suggests that New Zealand’s beloved pohutukawa could have originated in Australia.

Published in the American Journal of Botany, the study describes two new pohutukawa fossil species, which were discovered on the coast of Tasmania by a team of researchers at the University of Adelaide. The fossils date to about 25 million years ago. Because the pohutukawa belongs to the genus Metrosideros, the new species were dubbed Metrosideros dawsonii and Metrosideros wrightii.

It isn’t the first time that researchers have found traces of the pohutukawa’s ancestors in Australia. Fossils belonging to another subgenus of Metrosideros, also discovered in Tasmania, were shown to be about 35 million years old. As the authors of the study note, these findings “further strengthen the case for an Australian origin of the genus,” because they indicate that there was a diversity of ancient Metrosideros in Australia.

Also pointing to an Australian origin is the fact that the newer fossils are not as widely distributed as their ancestors. “These species may not have been as well adapted for long-distance dispersal as those other species, and so it is likely that they originated [in Australia],” Myall Tarran, a researcher at the University of Adelaide’s School of Biological Sciences, said.

Although the pohutukawa may not have originated in New Zealand, it has deep roots in the country’s past. According to a website run by the New Zealand government, 19th-century settlers were drawn to the pohutukawa’s blazing blossoms, using them to adorn their churches and dwellings. Long before that time, Maori regarded the pohutukawa as a sacred tree, and it is featured throughout Maori mythology.