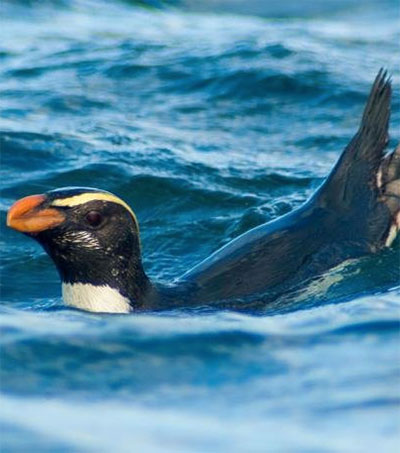 Every December, the Fiordland crested penguins, Eudyptes pachyrhynchus, which live on the South Island, disappear, Jason Daley reports for the Smithsonian journal. A new satellite study shows the penguins migrate up to 7000km to feed, in eight weeks, even though their home shores are teeming with food.

Researchers assumed they swam off the coast of the island on extended feeding trips. But no one had ever followed them. To study the incredible journey, zoologists from Otago University tagged 20 of the penguins with satellite trackers. Then they sat dumbfounded as the seabirds swam farther and farther south.

“My first reaction was there’s something wrong with the data,” project director Thomas Mattern said. “Then I was just puzzled, I was completely flabbergasted –where are they going, when will they stop?”

The birds, also known as Tawaki, stopped about halfway to Antarctica in a feeding area where warm and cold waters collide. The research appears in the American journal PLoS One.

The big question is why the birds feel the need to go so far out to sea.

Even stranger, at the same time they set out on their epic adventure, the fishing around their island home gets really good and there’s a veritable seafood buffet they could use to beef up. “The conditions closer to the New Zealand mainland are pretty good,” Mattern told Gizmodo. “There are no obvious reasons why Tawaki would have to travel as far as they did – there is no logical explanation for it.”