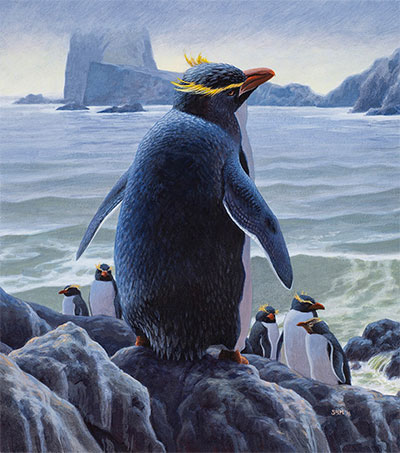 The discovery of two extinct penguin subspecies in New Zealand is a cautionary tale of the threats faced by the waddling birds in the wild. Veronique Greenwood reports for The New York Times.

For thousands of years, penguins have darted through the waters of the southern oceans, chasing fish and surfacing to nest on islands and landmasses sprinkled from the Galápagos to the Antarctic. Today there are around 20 penguin species, ranging from the playful Adelie to the stately Emperor. But there once were other penguins, including a previously unknown subspecies of dwarf yellow-eyed penguin in New Zealand.

You won’t be seeing it any time soon. It’s extinct, apparently wiped out by humans hundreds of years ago.

“We suspect that these Megadyptes penguins were on their way to becoming a full new species,” said Theresa Cole, a graduate student at University of Otago and co-author of a paper about this bird and another newly discovered extinct subspecies of crested penguin. “But they just didn’t get a chance, because people ate them.”

Cole and her colleagues sequenced DNA from many penguin species and built a family tree of the waddling birds living and dead. The resulting research, published in the journal Molecular and Biological Evolution, led to the discovery of these two subspecies. It also suggests that the same island environments that resulted in such diversity in the penguin family can also be linked to doom for some as they eventually came into contact with hungry human settlers.

The bones of both penguins have been found in trash heaps that date back to when humans arrived in the Chatham Islands. Circumstances suggest that the animals were cooked and eaten, and they soon went extinct.