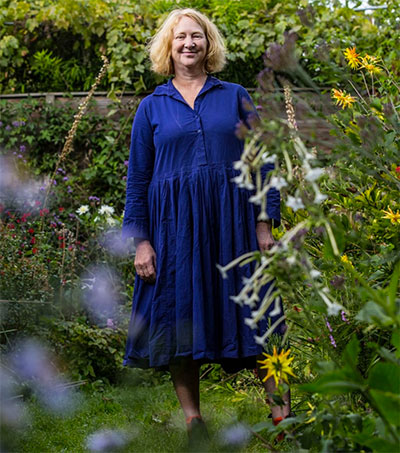 New Zealand-born London-based chef and co-owner of Rochelle Canteen Margot Henderson talks to The Telegraph about how she became a gardener and what she loves most about her inner-city garden for the “occasional” column, Personal Growth.

Henderson explains that she is a busy gardener and that she definitely “overplants”.

“I tend to go mad at Woottens [the nursery in Suffolk]. I go with a plan and suddenly see something and think, ‘Oh, I need one of that, and one of that …’ I felt ambitious and got their irises one year, and two or three years later I’ve had about two flowers,” she tells the newspaper.

“Once I start, I can’t stop. It’s a bit chaotic. I begin with a plan to work my way around in a logical manner, and then I spot something on the other side of the garden and have to do it straight away. I spend hours looking at it and thinking, ‘I should be doing this,’ but I’m quite enjoying the way it’s looking at the moment.

“I want the cottage garden look. Everyone tells me, ‘You need structure, Margot,’ but I hate the idea of structuring it all. Now I’m beginning to realise I probably do need to.

“We had half an acre of land [in New Zealand]; it was pretty rough and ready,” she says. “We had a big vegetable patch, a tennis court, hundreds of hydrangea that we used to throw ourselves into. We weren’t precious about anything. There were lots of trees, and a lot of lawn-mowing went on.

“It just sort of evolved by itself, it wasn’t preened. I think that’s in my genes now, the natural look. I couldn’t do neat gardening anyway. I’ve tried to, but you have to be out there the whole time. did you grow into gardening? I think gardening goes with your children getting older. Women hit the menopause and we can’t make babies any more, so we have to grow plants instead. It goes hand in hand with cooking, too. Making bread and things like that, where you’re watching something grow and transform. With gardening you can be a bit crap, though, and still end up with something that looks all right.

“[In my London garden I do see wildlife.] We have a fox at the moment. My friends think it’s great, but I’m not a fan. There are bees at the back – not mine – but there’s a bee man with a hive and tons of them in the garden, which can only be a good thing. And we have some sort of unusual birds in the tree. The tree is dead, but I don’t want to chop it down as it’s our only bit of structure. Instead I want to populate it with roses – I think it’s working, they’re definitely growing. Things are always happening, evolving in there. We even get some huge frogs and toads coming across from the neighbours.”