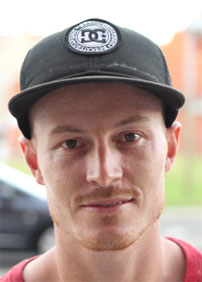 “When it comes to skateboarding, New Zealander Bjorn Johnston has put in work,” ESPN blogger Joel Rice writes. “Though he joined Element’s Australian team relatively recently, his resume runs quite deep. Prior to signing with Element, as well as his current shoe and apparel sponsors Krew and Supra, he happened to ride for DC and RVCA. ‘We just finished the Supra ‘Oz Man Out Tour’ here in Australia and New Zealand, which Stevie [Williams] was on. It was so sick. He’s another one of my idols growing up. So to hang out with him and skate was awesome.’ Pictures of Johnston have appeared in all the major magazines including Transworld, Thrasher and The Skateboard Mag.” He is based in Sydney.