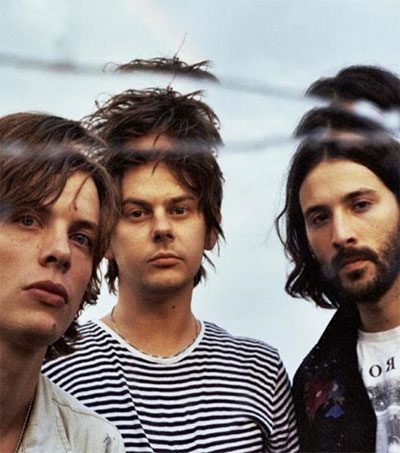 In Conversation with the Band Yak

One of “the most exciting acts around both on stage and on record” is called Yak, according to music site, The 405. Together the Wolverhampton-formed trio, including New Zealand-born drummer Elliot Rawson (pictured centre), talk about their new album Pursuit of Momentary Happiness, the process that led to it, and “other stuff that happened to pop up in conversation”.

Rawson previously played with Auckland bands The Mud Babies and Popstrangers. He also worked as a DJ, remixer and producer, under the guise of Weapons.

Inspirations behind this latest album include John Lennon, and a “bit of Mustang Sally”.

Singer-guitarist Oliver Henry Burslem says the band made the most of “living on the edge” while making the record.

“We didn’t have an option, really,” Burslem explains. “The business is structured in some kind of archaic idea that they give you the money, and the money is divided so you get that much for recording, that much for this … so apart from your living costs this is the great opportunity, everybody wants to be able to express themselves through music.”

Did the band ever lose faith in the process?

“You do have those days don’t you?” Rawson says. “But it’s fleeting, you just have those moments when it’s like ‘are we ever gonna get to the end of the songs or will we fuck it up in some way’. But … not really.”

Yak formed in 2014. The band released their debut album Alas Salvation in May 2016.