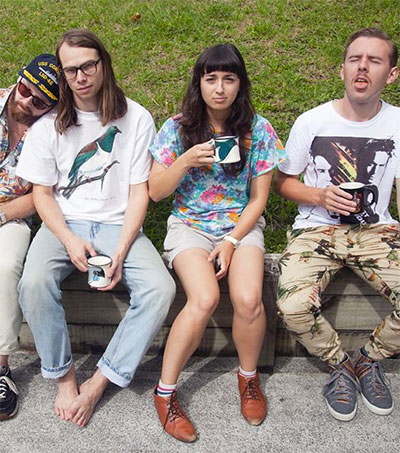 The Beths Look to the Future

The Beths is an Auckland guitar pop group who recently signed to Washington DC-based Carpark Records for the release of their debut album Future Me Hates Me, due out 10 August. The band has just released the record’s title track, “a fluid indie rocker chock-full of troublesome thoughts”, according to British online music and culture magazine The 405, who declare it their ‘Track of the Day’.

The band is led by Elizabeth Stokes, who has been toiling away in Auckland’s folk scene for a number of years, but now turns her attention to good ol’ rock with The Beths – something she had never considered before: “Fronting this kind of band was a new experience for me,” Stokes says. “I never thought I had the right voice for it.”

That’s an extremely surprising admission from the singer, as her voice crests perfectly atop the bustling indie rock gait that The Beths set out, matching it measure for measure with propulsive and dedicated delivery. Even more than just her voice being a perfect fit, so are her lyrics of anxiety, sleeplessness and regret. This is tied up with a beautiful bow in the self-effacing chorus, where Future Me Hates Me finds Stokes kicking out once and for all at her own self-destructiveness – but does it in such a blissful manner that we feel her resigning to live in the moment, and worry about the problems when they arise in the near future.

The band is currently on tour in Europe. They play at 57 Thomas Street in Manchester on 15 May, Le Pub in Newport on 16 May and The Cavern in Exeter on 20 May. Their first show on the continent is in Paris at Le Popin on 26 May.