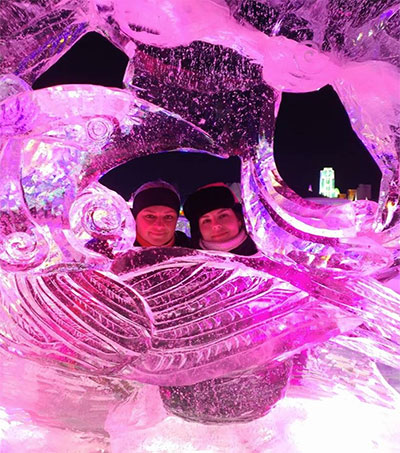 New Zealander Tatiana Zimina has recently returned from northeast China where she competed in ice and snow sculpting with her partner and two friends in the annual Harbin International Ice and Snow Sculpture Festival.

The only New Zealanders to compete in the festival, Stuff asked the West Auckland resident about her cool creations and why she does it.

“Each ice block is harvested from a natural river or lake. The carving technique is similar to wood but softer. It also chips. To start with we use power tools – a chainsaw and a router,” Zimina (pictured right) explains.

“The final stages are done by chisels that have teeth in them so you can remove larger pieces of the material. You have to create something to the best of your ability given the time constraints of two and a half days,” she says.

“We had two teams in ice sculpting this year, of two people each. My team created a sculpture called Tui on New Zealand Flax. We wanted to pick a scene that had something to tell about the beautiful New Zealand nature.

“For the snow sculpting our two teams combined because it was a larger block. Our sculpture was of a mother and baby whale.

“I started about 15 years ago. My first experience with it was in my hometown in Khabarovsk, Russia, before I moved to New Zealand 13 years ago.

“In New Zealand the only opportunity was to go overseas to China to compete. This was my third time to go to Harbin. It’s creating something big and spectacular and working with materials that are quite unique.”