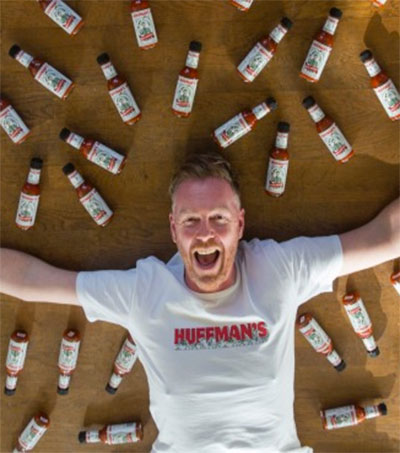 Wellington-based Huffman’s Hot Sauce has been named World Champion in the Pepper Blend category at a ceremony held in Louisiana. Auckland’s Culley’s and Kaikohe’s Fire Dragon Chillies were also named world champions in the hot and ultra hot categories respectively.

Over 1000 products were entered by 213 companies representing 13 countries at the event, considered as the world’s most prestigious chilli awards.

He originally created the recipe to use in his creations at Matterhorn Restaurant, and launched the sauce as a product after teaming up with Nick Brown (pictured).

Huffman sees the win as a “victory for the little guy”.

Brown says New Zealand’s healthy chilli scene is partly because the climate is good for growing, and because there is such a strong artisan food scene.

Huffman’s is sold in New Zealand, ships predominantly to Australia, has a strong following in Boston, and just shipped its first order to Sweden.