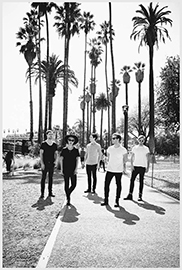 How The Naked and Famous Will Make It In America

Though alternative rock bands of the last few decades have oozed cool by rejecting the music industry and pretending not to care, The Naked and Famous didn’t move 19 time zones and nearly 7,000 miles from New Zealand to LA to risk not making it big. What’s perhaps surprising is how forthright and focused they are about it – it seems that the tall poppy syndrome that once plagued kiwis is on its way out.

And it is this hard-working attitude that has gotten them to where they are now. After the astounding international success of their first album, 2010’s Passive Me, Aggressive You, which peaked at No. 91 on the Billboard 200 and was featured on shows like Vampire Diaries, Gossip Girl, Grey’s Anatomy, True Blood, and One Tree Hill, the band hopes that their just-released second album In Rolling Waves will be even more successful.

The Naked and Famous are about to embark on a four-month tour if the US, Britain, Europe and finally back home to New Zealand for the first time in 2 years, where they will play Big Day Out in Auckland.