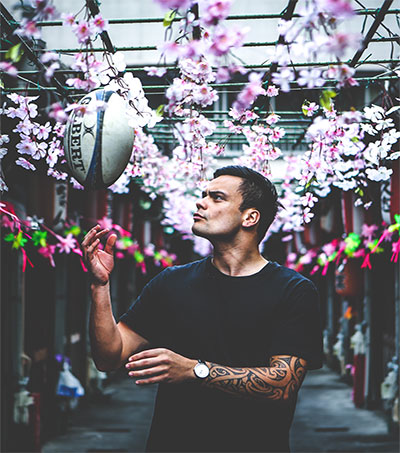 For a Japanese national, the question of why a person from the West would come to Japan is a fascinating one, so much so that there’s even a TV show about it: You wa Nani Shi ni Nihon E? (“Why Did You Come to Japan?”). For New Zealand rugby player Jared James, 24, the answer is, eventually, that the people he met made Japan “feel like home.”

James is profiled in the short documentary Union, which is co-produced by Nelson trio Jericho Rock-Archer and brothers Joshua Rollo and Phillip Rollo.

James is the only foreigner in the all Japanese rugby team, Shizuoka Rugby Club.

He moved to Shizuoka in an attempt to reinvent himself and fell into a bit of a rut before finding salvation in rugby, which helped him join a community. The general beats of the documentary are no doubt a familiar tale to many non-Japanese living here currently.

Union is meticulously shot and covers a lot of ground in its three-minute running time. It’s also just short enough to get sucked into the many other documentaries posted on Loading Docs, which was launched in 2014 to promote novice New Zealand filmmakers.

Rock-Archer told Stuff that James’ team recently won the finals, and were headed to the nationals next.

“It’s a great way for him to boost his profile and advance through the Japanese rugby team and to show people in Japan that there are other ways to get involved with the Japanese culture without doing traditional Japanese art and things.”