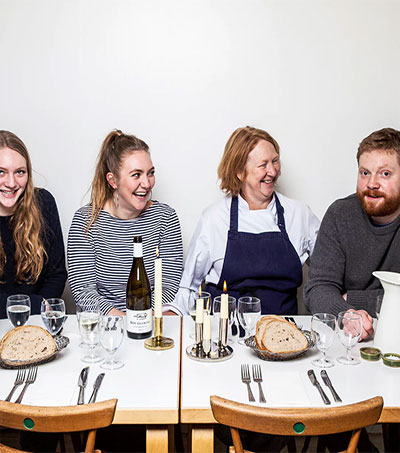 New Zealand-born Margot Henderson is one of five professional cooks featured in the Guardian discussing how having kids changed their lives, in the kitchen and at home.

“I’d known Fergus for five months when we got married and three months later Hector was conceived,” Henderson says. “We were having a great time together cooking at the French House and I continued working hard, but that got increasingly exhausting. My legs were giving out at the stove and I wanted to be in bed at midnight rather than cleaning down a kitchen. I remember crying a lot.

“None of my kids were born exactly; they were all caesareans. I was hopeless at the birth part. Yet the breastfeeding was wonderful and I fed all my bubs for a year. But very soon after each arrived, if the staff was short at the restaurant, I’d be in the kitchen with a kid strapped onto me, and it went from there. It’s hard to keep your career going in a kitchen when you’re having babies, if you believe that to be a good cook you should be cooking all the time. The other chefs had to understand that part of their job was having nippers around their feet. I think they brought life and joy to the kitchen.

“I’m trying to think what the best thing about being a mother is. Not all the washing after getting back from work, that’s for sure. I suppose the glorious thing is that you feed these little things who become your new bunch of buddies and you love hanging out with them. Well, sometimes you bloody don’t, obviously, but there’s an unconditional love which is amazing.”

Henderson offers up her ginger crunch recipe, “based on one from the Edmonds Cookery Book – every house in New Zealand has one.”

Photo by Alex Lake for the Observer.