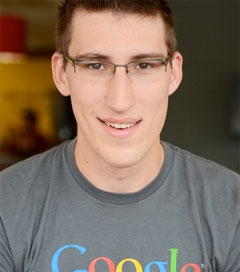 Hamilton man Boris Pfahringer has secured an internship with Google and will spend 14 weeks at the search giant’s New York office in Manhattan.

Pfahringer – who has just graduated with a bachelor of computing and mathematical sciences, with honours, from the University of Waikato – knows how big a deal it is.

“I’m looking forward to working in the Google environment and also having the opportunity to explore the city. It’s my first time in New York,” Pfahringer said.

Photographs of Google’s Chelsea offices show an interactive space with fixtures not usually seen in an office.

There is a ladder chute to get between some floors. Some walls are covered in graffiti-style artwork and people move around on scooters.

Pfahringer is a former student of Hamilton Boys’ High School. In 2009, as a Year 13 student, he was chosen to go to the International Olympiad for Informatics in Bulgaria. The competition is regarded as the world’s top programming contest for secondary school students and attracts hundreds of competitors.

Pfahringer and fellow New Zealander Jamie McCloskey came away with the bronze medal that year.